I've cycled to work every day this week the 16 mile round trip, which means assuming I cycle in tomorrow I will have totalled 78 miles. The weather's been good - if a little chilly, and I've had no band practice. I've also been to the gym, a spinning class and swimming at lunchtimes. I'm usually a bit busy at weekends to cycle, but go for walks and gardening etc.

I'm also trying to loose about 1lb a week to get down to 11st (25 BMI) by the end of the year. I'm currently just under 12st (and 5'6") - which is about half a stone heavier than when I did LEJOG (still the same height!). According to websites if I consume about 2000 calories per day or less and exercise regularly I should make my target. So I'm having 3 medium-sized meals a day, just snacking on fruit and not drinking much alcohol. I'm not bothering counting calories though in any detail - too much effort. As I said earlier loosing weight is a lot cheaper option than buying a lighter bike - and a healthy approach. I usually try to eat high-fibre, low-fat foods to keep my cholersterol down too, but I don't agree with faddy diets - and pretty much eat and drink what I fancy.
Posted by Pete at 19:59 No comments: 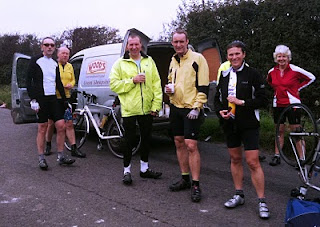 Eight of us from the LEJOG trip met up in on a sunny autumn day for a 60 odd mile Sunday ride. Angela and Kate stayed the Sat night at the Pendley Manor Hotel, and I met up with them for a drink or three at my local pub in Tring. Edward, Nigel, Steve and John joined us at my house in the morning, with Nigel and Steve cycling from their homes in Hampton and NE London. As Ed had done an audax the day before he decided to start and end at the first coffee stop - so he took the flasks. We set off at 10.10 on 10/10/10 and met Jo on the road after Wendover. We had our first coffee stop pictured Nigel, Ed, Steve, John, Kate and Angela (with Jo hiding). Ed provided the 'Wood's Beers' support vehicle with my flasks of coffee, buscuits and jelly babies.
The sun broke out and it was very pleasant with a wind behind us. Made good progress until the road was closed due to a traffic accident involving a motorbike. So we used the map and John's GPS to find a diversion near Ewelme, which involved a very steep uphill - followed by a nice long descent to the riverside pub at Wallingford. 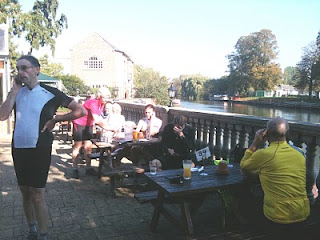 In the afternoon Nigel sped off home for his 100+ round trip, whilst the rest of us headed for Thame. There was quite a strong headwind, and with a full stomach and panniers I found it quite a slog. 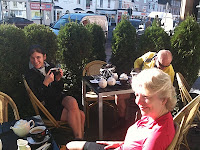 We had a welcome cup of tea and penguin biscuits outside a pub in Thame by which time it was around 4pm. Jo and John headed off leaving the remaining 5 to cycle to Longwick. I picked up my flasks and coffee stuff from Ed's van whilst the other 3 carried on. I spotted them later a bit further up the road as I think they must have taken a 'long-cut', however I decided against catching them up. By the time I got back to Tring it was 6pm - and still fine with a setting sun. I reckon I'd done 65 miles - although Kate, Angela and Steve had clocked 70 miles thanks to the 2 detours. I'm still a bit stiff.

It was great to meet up with everyone and to catch up on all their news and plans for future fundraising trips. It made me quite tempted. I'm also tempted to buy a proper road bike, but have decided for now to manage with my hybrid, use a smaller saddle bag for such trips, and maybe lose half a stone. Buying a bike that is 3kg less weight would probably cost over £500 - whereas a diet is free! We're planning another meeting in Kent in the spring, and I'm meeting up with Ellen and friends for a ride near Stevenage next month.
Posted by Pete at 19:33 No comments:

I cycled to Wendover, Longwick and back via Weston Turville today in the sun putting up orange triangles to waymark the first and last parts of next week's Wallingford bike ride. 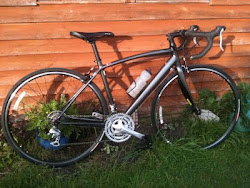 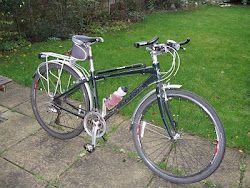